Fashion Designer A to Z 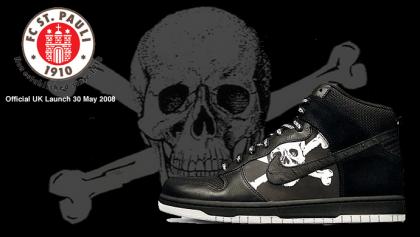 Nike has collaborated with German football club FC St. Pauli based in Hamburg. It was in the mid-80's that St. Pauli's transition from a traditional club into a "Kult" club began. The club was also able to turn the location of its ground in the dock area part of town St. Pauli near Hamburg's famous Reeperbahn - centre of the city's nightlife and its red-light district - to its advantage. An alternative fan scene emerged built around left-leaning politics and the "event" and party atmosphere of the club's matches. Supporters adopted the skull and crossbones as their own unofficial emblem. Loved more for the rebel stature than performance FC St. Pauli remain a cult football team.

・London Birth of a Cult

・The dress attachable a wall